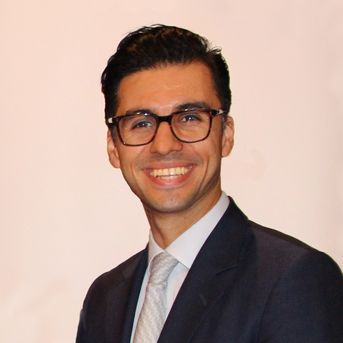 Shahin was a Foundation boarder at Reed’s from 1995 to 2002. He was born in Tehran in the middle of the Iran–Iraq War, during which time his family were separated from their father. Desperate, his mother fled the country with her two young sons to seek sanctuary. She worked extremely hard to look after them, at the cost of her own physical and mental health. However, she knew that a good education was the key to a new life for her sons and she discovered a school with a Founder that agreed.

After Reed’s, Shahin read Law at University of London. He was awarded a full sponsorship to attend Law School and was subsequently recruited by one of the world's pre-eminent law firms, Clifford Chance. He is a qualified solicitor and is now an Associate Partner at Ernst & Young. Shahin is married to a fellow Old Reedonian and has two young children - he hopes to send them both to Reed’s one day!

HOW DID YOU END UP ATTENDING REED’S?

Like many Foundationers at Reed’s, I was born into challenging circumstances. Fearing for her life and the lives of her two young sons, my mother left Iran to protect us. Coming to a new country, our early years were spent moving from place to place searching for some kind of stability and security. My mother, a proud woman, worked extremely hard to look after us at the cost of her own physical and mental health. The signs of depression were clear, even to me, even at that young age, but she plugged on the only way she knew how - with hard work.

In a typical day we would wake up together at 4.00am. I would jump into the back of her delivery van with my duvet wrapped around me and we would make food deliveries across London. She would wake me up 15 minutes before we reached my primary school, pass me my uniform and kiss me goodbye before she was late for her next job.

WHAT WAS STARTING AT REED’S LIKE AFTER THE PREVIOUS INSTABILITY IN YOUR LIFE?

On my first day at Reed’s I was brimming with excitement. I immediately felt part of something extraordinary. The space, the facilities, the people... All the boys were wearing the same blazers with the same school crest and I felt like an equal, in fact I felt like a child again, a very lucky one. Life began to settle down and I finally started to feel a sense of balance and belonging.

WHAT OPPORTUNITIES WERE YOU GIVEN AT REED’S?

I was introduced to Hockey and Rugby and went on to represent the School's 1st XI Hockey Team and 1st XV Rugby team; I was given the opportunity to study Shakespeare, Latin and Modern Languages and went on to achieve excellent GCSE and A Level results; I acted in School productions of Romeo & Juliet and Grease; I won debating competitions; was awarded the Duke of Edinburgh Gold award and even piloted a two-man plane as a member of the RAF!

I was grateful for every opportunity that was presented to me and I grabbed hold of each and every one; I was allowed to see my own limitless potentiality and anything felt possible.

WHAT ARE YOUR REFLECTIONS ABOUT REED’S NOW?

All I have achieved in my life would not have been possible without Reed’s and the Foundation.  I will forever be in its debt for giving me the opportunity to reach my full potential and the ability to inspire my children to reach theirs. And, despite everything I have achieved in my life since leaving Reed’s, I have not seen my mother prouder than the day I was appointed School Captain!  For my part, having recently been appointed to the Reed’s Foundation Board is an honour and just one way I can repay some of my debt of gratitude.