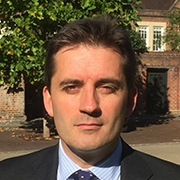 James has been a Governor at Reed’s School since 2016. Educated at Eton College, he has an MA in Modern History from Oxford University and played 21 first-class matches for Oxford University Cricket Club between 1997 and 1999. He then served in the British Army from 2000 until 2009 after which he became a History Teacher at Eton College.  James briefly took charge of the History Department before moving to his present role as Master-in-College in 2015.